I’m going to be tote-woolly (bad pun) honest.  I started writing this blog post yesterday and then realized that I was just rambling about pretty much nothing, so I decided to delete it and start over again, because, you know, I could go on and on about all of the things going on, but it would take me until next week to list them all for you and I just don’t have the time for that.   I have a rehearsal dinner to plan (because my son is getting married next weekend).  Sorry.  I know you were looking forward to that list, but I really wouldn’t want you nodding off in front of your computer or your smartphone.  If you happen to be in the company of other humans, that might be a little embarrassing. 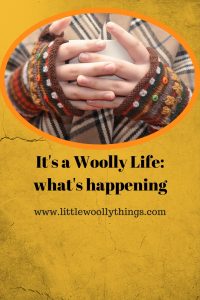 Anyway, since this is supposed to be a blog about woolly things, there have been a few recent happenings in the woollier part of my world that I can share.  I had a design proposal rejected.  I have not given up on it, though.  I am keeping it around and planning on refining it some more.  It might work with just a color change.

I also finished a shawl pattern and got the photos done.  Yay!  As soon as it goes live, I will shout it to the world.  You can count on me.

And I have another pattern finished that just needs the photos.  There is actually a little sunshine happening out there today, so I just might see if I can talk my 17-year-old into modeling for me.  She was pretty good-natured about working with me on my last photo shoot, and I do believe the battery for my camera is actually charged right now, so that’s a bonus.  It’s easier to get photos done, that way.  Ask me how I know.

Something pretty is in the works!

I am also working on a new project, of course.  It’s so new, in fact, that I don’t even have an Instagram pic to show you yet.  I started playing around with a 2-color linen stitch and I’m really liking it.  I’m actually “swatching” in the size and shape of a cowl, so that I can write up the pattern if it turns out to be super fabulous and then, I won’t have to work it up again.  I sometimes cheat like that.

I’m actually pretty excited about this one.  The best designs are the ones that capture your imagination and just won’t let you go.  My Gypsy Caravan Shawl was one of those.  I didn’t realize how much this one had gotten hold of me until I was at my acupuncture appointment this morning and I was lying there (supposedly relaxing) thinking about some really cool things that I could do with it.  I came up with three different ideas!  Thought about them all the way home and decided which one I like best, so my plans for this evening will definitely include a little bit of woolly experimentation.  I have never seen anything like this before (not to say that it has never been done), so I am really excited to see how it will turn out.  Wish me luck – or better yet, skill.

Support through ko-fi.com helps me to pay for podcast giveaway prizes and the cost of shipping out those prizes to YOU!